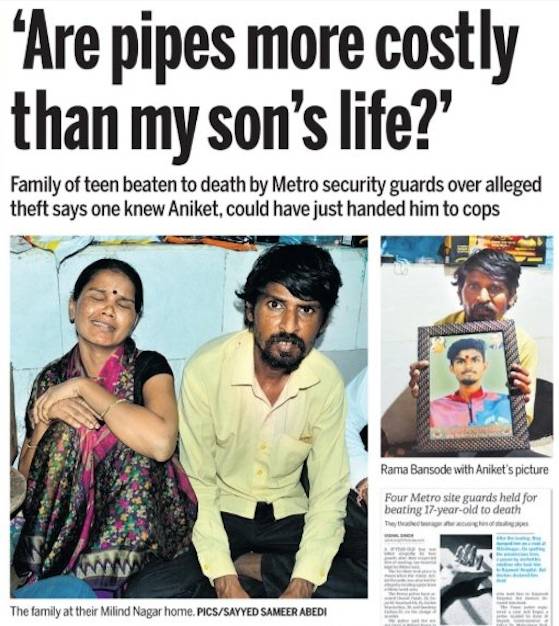 On Wednesday, March 31st, 17-year-old teenager Aniket Bandode a resident of Tiwari compound, Milind Nagar on Jogeshwari-Vikroli Link road was thrashed to death. If all hell broke loose for someone, it was for Aniket.

How he was killed.

Aniket was beaten up by the so-called security guards in intervals. After a few rounds of thrashing, Aniketh was tied up and beaten so badly with the favda (digging shovel) that he was completely immobilised. Even this wasn’t sufficient, so the perpetrators picked him up and banged him on to the ground. Completely immobilised, he was then perched between two riders on a motorcycle and thrown in a ditch near his home.

By the time he was discovered and taken to the hospital, it was too late.

We are we so blinded by neoliberal belief’s that we fail to see the systemic faults in this incident which ultimately leads to the incentives to commit this crime.

Here is why Delhi Metro Rail Corporation should be held at least morally and economically responsible for this tragedy.

DMRC should have made it clear to its contractors and disqualified them for hiring people who are drug addicts or criminals. DMRC has been irresponsible in hiring contractors and this ultimate tragedy could have been averted altogether.

I hope DMRC wake up and does an audit and gives a statement owning up morally to this incident and loss of lives.

The precise reason why contractors and sub-contractors are hired is to get away with responsibilty. But a body like DMRC should be setting better standards and should look into this matter and own up its moral shortcomings.