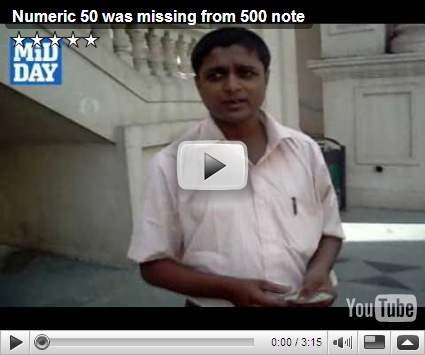 Kumble recalled, "After withdrawing the cash, I went to a hardware shop nearby to buy some tiles for an ongoing project. I paid Rs 2,500. It was the shopkeeper, Pawan Gupta, who pointed out the discrepancy in the notes. The shopkeeper accused me of producing fake notes."
A shocked Kumble explained that he had just withdrawn the cash from the nearby ATM and showed the withdrawal slip.
On further inspection, Gupta and Kumble realised that the discrepancy was in the notes printed in serial numbers 4FB962449 to 53. All the other security watermarks on the currency, including the value of the denomination printed in words, were intact.
'Rare find'

Kumble then went back to the ATM from where he was directed to the Powai branch of the bank. The officials found that the notes were genuine and assured Kumble that they will replace them after completing an internal investigation.
Following Kumble's complaint, senior ICICI officials visited the ATM centre and found that the remaining Rs 500 notes in the machine had no printing errors. The CCTV cameras in the ATM had captured images of Kumble withdrawing cash, corroborating his claims. The images, however, didn't show the details of the withdrawn currency. An ICICI spokesperson said, "We are looking into the matter."
A spokesperson for Reserve Bank of India said, "Such an occurrence is rare. We will need to verify the notes. If they are genuine, we will replace them."
However, Kumble wants to keep the notes with him. "It is a rare find. I want to preserve them as souvenirs," he said.