Lewis Ryan loves jumping off railings. No, he isn't bent on committing suicide. He is not a budding athlete or an adventurer either. The 14-year old has an unusual hobby, he hops on a customised 'mod bike'.14-year old Lewis Ryan handling his bike on street side at Powai

Welcome to the world of trial biking where a rider negotiates man made or natural obstacles without the feet touching the ground.

Having spent more than &pound;1000 to get the 20" Zoo brand mod bike, there can be little doubt about this Powai resident's craziness for his hobby. "I have assembled the whole bike here after importing all parts from UK," explains Lewis. With a self-learning experience of nearly two years, Lewis knows his tricks of the trade well. In a sport classified in street and natural biking, the Scottish descent prefers the roadside version. 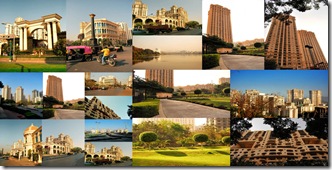 "Back in Scotland, in my vicinity, there are so many wood-houses and good street-side obstacles that I learnt all my basic hops there and enjoy that even now," said Lewis. Natural biking is done over tree logs on mountains, across rivers in between any ecological habitat -- an uncommon site in the city. Lewis practices his gravity defying tricks in his building compound or the terrace.

The trials require lot of balance based on good brake control for which his bike has a disc brake in front tyre which is 19-inch and a hydraulic brake in the 20-inch rear tyres where the maximum brake force is needed. Tyres and rims are wide, allowing low pressures and increased contact and grip. The most unusual part of his bike is that there is no seat.

But as far as competition goes, in a city which has enough man made or natural obstacles to pursue the activity, hardly anyone is seen following what Lewis does. Even back home Lewis hasn't participated in any competitions, though many are held at the international level. "This is a hobby, I don't think I would want to make a career out of it," said Lewis.

The hobbyist, though, is a motorsports freak and thinks he is made for speed. "I have been karting for two years now and am soon buying a kart for myself," said Lewis, who wakes up from sleep to the view of the Powai karting track.

The karting protege; was also the winner of Mumbai leg of the recently concluded Amaron Karting Challenge held in Powai Go Karting arena and would be going to Cochin for a karting championship in June.

This article was sourced from here