From Wikipedia, the free encyclopedia

Powai Lake (named after Framaji Kavasji Powai Estate) is an artificial lake, situated in the northern suburb of Mumbai, in the Powai valley, where a Powai village with cluster of huts existed. The city suburb called Powai, shares its name with the lake. Indian Institute of Technology, Bombay one of the premier institutions of science and technology in India is located to the east of the lake.[1] Another famous institution, the National Institute of Industrial Engineering (NITIE) is also located close to the lake. Housing complexes and plush hotels are developed all around the lake periphery. Population around the lake has thus substantially increased over the years. 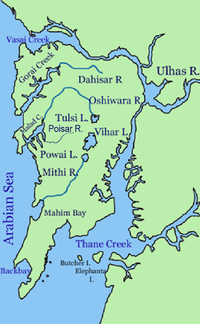 The Powai Lake has gone through many stages of water quality degradation. The lake water which used to supply to Mumbai for drinking water has been declared unfit to drink. The Lake still remains a tourist attraction.[3]

A stream tributary of Mithi river, which served the Powai village's water supply needs, was dammed in 1891, during the British period, initially to augment water supply to the then Bombay city (now called Mumbai), by constructing two dams of 10 m height each to store the rain waters flowing from the lower slopes of the Western Ghats and streams from the eastern and northeastern slopes of hills.[4] It was planned as an antiwater famine measure, to the southeast of Vihar Lake (a much larger lake) also for water supply to Mumbai city.[5]

Before the lake was built by the British, in the year 1799 A.D., the estate where the lake is now located was leased on a yearly rent to Dr. Scott and after his death in 1816 A.D., the government took control of the estate in 1826 A.D., and leased it once again to one Mr. Framaji Kavasji, a Parsi merchant, after whom the lake was named when it was built in 1891.

The drinking water supply objective of the lake was abandoned in the early 1990s, in view of poor quality of the water stored, caused due to pollution, water hyacinth and weeds, untreated sewage and large silt deposit. The lake was, therefore, leased out to the Western India Fishing Association, a quasi government organisation who used it for both fish culture and angling. Later, the Bombay Presidency Angling Association was formed in 1936 and later in 1955, under the Societies Registration Act 1860, it was registered as “The Maharashtra State Angling Association” (MSAA) and the lake is now under their control. Realising the gravity of the environmental pollution of the lake, the MSSA has revised its constitution,

to actively care for, clean, develop, maintain, and beautify the Environment at Powai Lake.

MSAA is now involved with a) removal of water Hyacinth infestation, b) supporting research with Fisheries Dept.for conservation of the Indian Mahaseer,c) Water quality analysis d) and augmenting security.[2]

The lake is about 40 km (25 miles) from Mumbai by road and is approached via King's Circle, Sion, and Kurla or through Santa Cruz andAndheri.[6] Kanjurmarg on the central main line of the Mumbai Suburban Railway is the nearest railway station to the lake.

It is reported that the average rainfall at Powai is about 2540 mm (85 inches), and the lake overflows for about for sixty days each year. The overflow from the lake flows into the Mithi River. Silt studies conducted in 1995 estimates that 450
0 lakh cubic metres of silt has been deposited in the lake since its construction.[2] It supplied two million gallons of water to Bombay (now Mumbai) when it was built. Following the constrcution of the Tansa dam and caetion of the reservoir, in 1892, Powai waters were used for irrigation.[7] The lake drains a catchment of 6.61 km² (part of the Powai-Kanheri hill ranges which also drain into the adjoining Vihar Lake and Tulsi Lake). The dam, built in stone masonry has a height varying from 3 m to 6m with top level of the dam kept at E.L. 58.5 m (with Town hall datum).[8] Government of Maharashtra reports that due to eutrophication of the lake water from untreated sewage and garbage from nearby residential and slum colonies, the lake water is unfit for drinking water use. Hence, the lake is now used for recreation, gardening, cattle washing and fishing. The water of the lake is also supplied to Aarey colony and L&T for non domestic uses. Dissolved Oxygen (DO) level at the bottom of the lake is reported to be 0.71 mg/litre and at surface 4.11 mg/litre, average value of pH is 7.2 and COD is 42.70 mg/litre on the surface and 119 mg/litre at the bottom of the lake.[9]

Appreciating the problem of silting, growth of water hyacinth, weed, and eutrophication of the lake, the IIT Bombay's Class of 1980 launched a "Revitalization of Powai Lake” with the objective of restoring the lake to its original pristine and sustainable form by adopting Eco-friendly designs and materials for the restoration works.[10]

Some of the tasks proposed to be undertaken with the funds donated by IIT, Bombay included:

• Starting a publicity and an awareness program in the area

• Building embankments, walkways and pathways to the lake

• Planting trees, and creating a garden

The project was proposed to be professionally managed with a project manager working under directives of IIT Bombay with an “Oversight Committee“ to monitor objectives set for the restoration work.

In 1995, the National Lake Conservation Plan (NLCP) of the Ministry of Environment and Forests (MoE&F),Government of India, reviewed the condition of Powai Lake and included the Lake in its list of ten major lakes in the country for revival and improvements. The restoration/revival programme, fully funded by the NLCP, was launched in April 2002, and implemented by Bombay Municipal Corporation (BMC) now called Brihanmumbai Municipal Corporation (BMC), the Government of Maharashtra and as a result the status of the lake has undergone a major shift from the hypertrophic condition to mesotrophic condition by adopting a novel technique of aeration and bioremediation. This has resulted in the lake being used for fishing and recreational purposes.

The Lake's water depth is reported to have reduced to as little as 0.33 m (1 feet)at some locations, on account of the large inflow of sewage,domestic waste water and silt from surrounding residential and industrial areas.[11]

Brihanmumbai Municipal Corporation (BMC) has therefore plans to desilt the Powai Lake at a cost of US $ 9 million.[12]

Balsam bushes, in their full bloom, in pink-purple color are seen around the lake periphery, like a carpet.[15]

A view of North Mumbai as seen from Powai Lake